Showing posts from January, 2011
Show all

It's a debate as to what is being judged more closely and harshly on the new season of "American Idol": the would-be idols, or the new judges.

First impressions after Week One and last night: the contestants are still a mixed bag of talent and bozos.

The new judges are a breath of fresh air.

If this sounds like an indictment against the sour-pussed Simon Cowell, so be it.

The new twosome, former Aerosmith front man Steven Tyler and singer/dancer/actress Jennifer Lopez, have shown the ability to render judgment without quarts of vinegar. It comes out in teaspoonfuls from Tyler and Lopez.

The third judge, Randy Jackson, seems to be at times trying to compensate for the loss of Cowell by going overboard with mean-spirited comments---even when they're obviously undeserved.

They fall flat coming out of Jackson's mouth.

But the trio of judges makes for a nice blend.

Tyler is funny, Lopez is adorable and has empathy, and Jackson is the returning vet who feels the need to remind…
Post a Comment
Read more

Jared Loughner is, without question, off his rocker. A total nut job. The elevator doesn't go all the way to the top floor---all that stuff.

But what he's not, is insane.

At least not in the "I had no idea what the HELL I was doing" kind of way.

Loughner, the alleged gunman---not that we have to really use "alleged," but there you go---in the shootings of U.S. Rep. Gabrielle Giffords (D-AZ) and several others, made his first appearance in court yesterday. And he's just plain nuts.

Loughner was seen smiling in court as charges were read against him. But not in the "I'm just a happy-go-lucky guy" way---in the "he knows something we don't" way.

Charlie Manson smiled a lot, you know. And you remember what atrocities he was responsible for.

Loughner is only 22, yet his mind is already filled with hate and paranoia and he's just too young to be so terribly jaded.

Unless he's bonkers---which he is.

But he's not insane.

Outside the Bun, Inside the Tortilla

You've got to hand it to Taco Bell. They keep pumping out new menu items using the same five ingredients.

They're thinking "outside the bun" all the time, they are.

First, this isn't an anti-Taco Bell rant. Quite the contrary; I find T-Bell to be the best "bang for your buck" among the fast food competitors. I like all the menu items whose costs are measured in cents, not dollars. I like that you can take as many sauce packets as you want, sans rationing.

And it truly is "fast"---much more so than the burger joints.

Taco Bell does more with five ingredients than some places do with twice that many.

The folks at T-Bell have been saddled with tortillas, beans, beef or chicken, tomatoes and onions for decades, yet they keep coming up with new menu items including just those ingredients, with few exceptions.

Everything is self-wrapped in its own casing, for the most part, except for the tacos, which are the roofless convertibles to the rest of the menu&…
1 comment
Read more 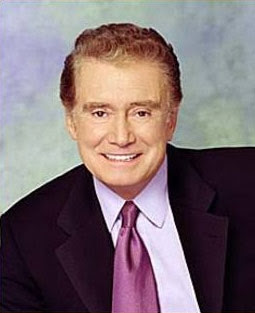 If you wanted to launch a nearly-50-year career in television, invading people's homes and gabbing their ears off, you could have done better than to be Joey Bishop's sidekick, of all things.

Yet that's the path that Regis Philbin took, and it worked.

Philbin was the quintessential second banana---kind of a poor man's Ed McMahon, if you can imagine such a thing---for four years in the mid-to-late 1960s, working under the shadow of talk show host and former Rat Packer Bishop, late nights on ABC.

For many, that might have been the end of the resume.

Now, about 50 years after it started, Philbin's career is about to come to an end. He's leaving "Live with Regis and Kelly" at the end of the year, a year in which he'll turn 80 years old.

Whenever a celebrity can leave his or her medium on his or her own terms, that's a feather in the old cap. For every Carson or Lett…
Post a Comment
Read more

In the days leading up to President John Kennedy's fateful trip to Dallas in November, 1963, it would seem that, by today's standards, all the wrong things were done---if you wanted to keep a president alive, that is.

Maps of Kennedy's motorcade route through the city were published on the front page of the local newspapers. The "bubble top" of his limousine was removed, so people could more easily see him---and shoot him.

All this in a part of the country where he wasn't exactly a native son.

Can you imagine such egregious decisions being made today?

Of course not. Today, presidents can bug in and out of town in almost stealth-like fashion, compared to JFK's Texas trip in 1963. Often, news of the president's impending visit doesn't hit the papers until the day before or even the day of the visit. And those stories certainly wouldn't publish the president's planned route from stop to stop.

Take THAT! (but none of mine) Good for Elizabeth Edwards. Better for her children.

It was reported by CNN this morning that Edwards, who died on December 7, 2010 from complications due to cancer, left her estranged, philandering husband, former Senator and presidential candidate John Edwards, out of her will.

CNN said that Elizabeth Edwards, in a will dated December 1, wrote, "All of my furniture, furnishings, household goods, jewelry, china, silverware and personal effects and any automobiles ... to be divided among them ...," meaning her three remaining children---Catharine, Emma and John. Another son, Wade, died in a car crash in 1996.

The will names 28-year-old Catharine as the executor.

Elizabeth Edwards was diagnosed with breast cancer shortly after her husband's failed bid for the vice presidency in November 2004.

John Edwards eventually admitted to an affair with former campaign videographer Rielle Hunter, which took place, he said, in 2006 when his wife's cancer was in remissio…
Post a Comment
Read more

I started eating on Thanksgiving Day and I haven't stopped.

Correction: I did stop---to go to the bathroom, and to breathe---barely.

I remember having a routine physical seven or eight years ago, sometime in mid-November. My doctor said everything was fine, but that I could drop a few pounds.

Sure, who couldn't stand to lose some weight?

But notice the first sentence, two paragraphs above. The checkup took place in mid-November.

You think I'm losing weight from mid-November through the New Year?

My wife won't agree with me, but I put partial blame on her. She's an Italian-Polish woman who can cook circles around you, which means that her dishes aren't exactly to be confused with anything Lean Cuisine would come out with.

So yeah, I blame her, a little. I mean, she cooks so GOOD.

So we started eating on Thanksgiving Day at our house, like the rest of the country. But we pressed on, long after the leftover hot turkey sandwiches and my traditional turkey soup had been …
Post a Comment
Read more
More posts